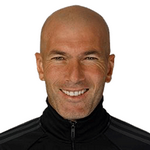 There is a widespread belief that Zidane’s role as a manager of this Real Madrid side involves him with only managing the egos and keeping them happy. To an extent, it is true that Zidane’s primary job is man management. Having been a star himself during his playing career and also a part of the Galacticos at Real, Zidane knows what the expectations are like at the Madrid club. He has experienced everything first hand and knows the problems involved inside the football club. Having been a part of the Real Madrid set up for seven years before his appointment as a manager, Zidane knows the club well and also has a good relationship with the players. His legend status as a player also gives him the respect from the squad, something that was a problem for the players previously under Rafa Benitez.

During his study for the licensing badges, Zidane watched Guardiola at Bayern Munich and attended a few sessions. However, he showed an inclination towards Marcelo Bielsa, manager of Marseille and Christian Gourcuff who was managing Lorient, at the time. Gourcuff is known for building fluid attacking sides with a stringent budget. Zidane’s influence in a managerial aspect comes from these encounters.

As a manager, with a vast assortment of stars, Zidane continued with a 4-3-3 using Modric and Kroos along with Isco/ James as part of the midfield trio. The BBC partnership up front was preferred. Kroos was chosen to be the lone pivot in this system, having been moulded into an excellent ball player in that role under Pep Guardiola at Bayern Munich.